This month’s newsletter was curated by Jeff, who has his own blog here: www.jeffhammerquist.com/

February brought many exciting developments for the Integral Permaculture Academy. The team began testing a new platform for the many online courses it is ofering, as well as working a new website for the 8th life ecovillage project.  We also worked with the Academy on the new Internship design we’re starting to implement from May at 8thLife, with the first on site iPDC course in July this year.
You can see the leaflet for that here: www.bit.ly/iPDC-8thLife 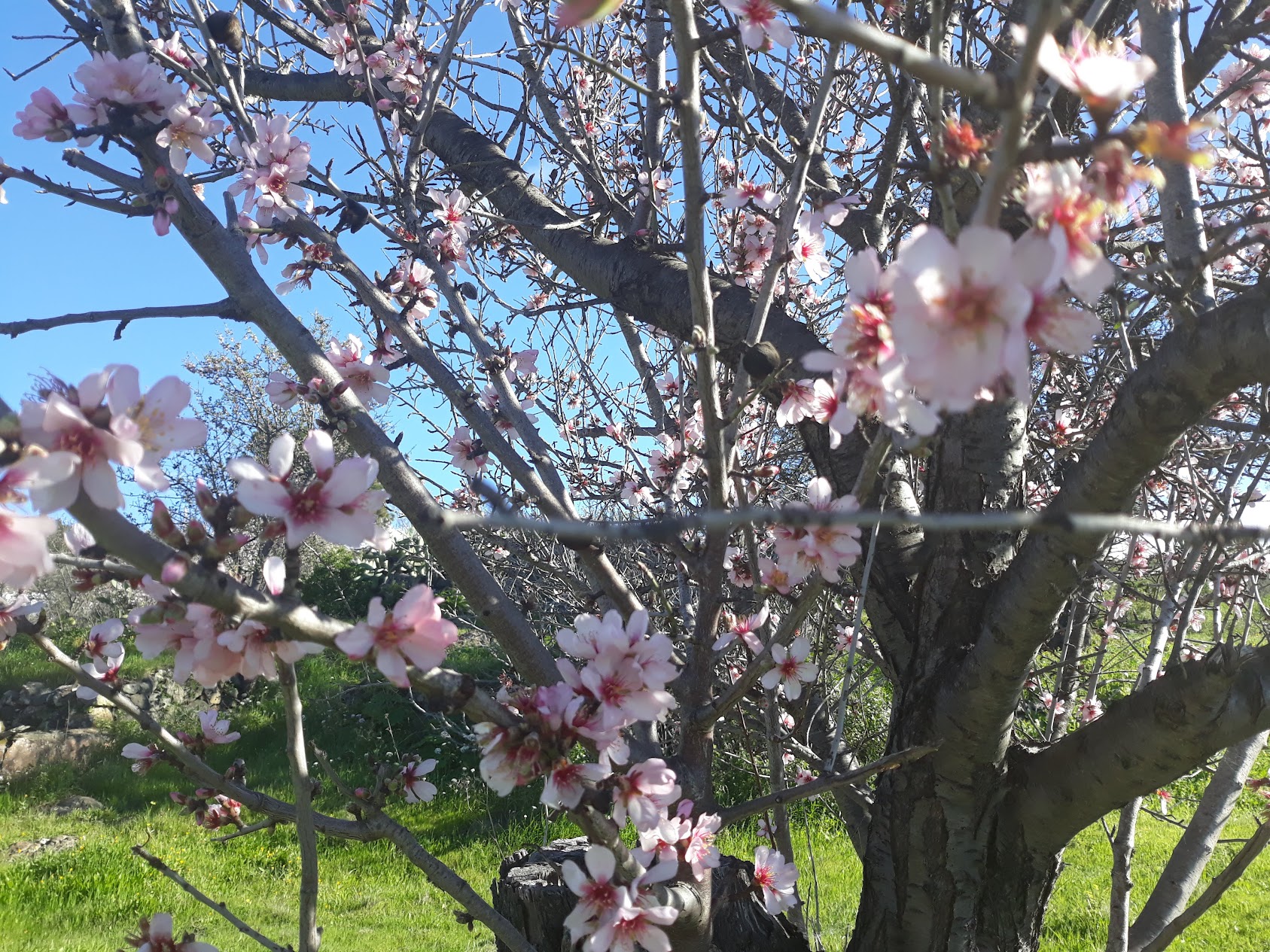 February got off to a wet start. The 8th life crowd welcomed Jeff, our new intern from the USA, who got right to work helping Sandra (from Colombia, resident in Spain) move the camping shower to accommodate taller guests. 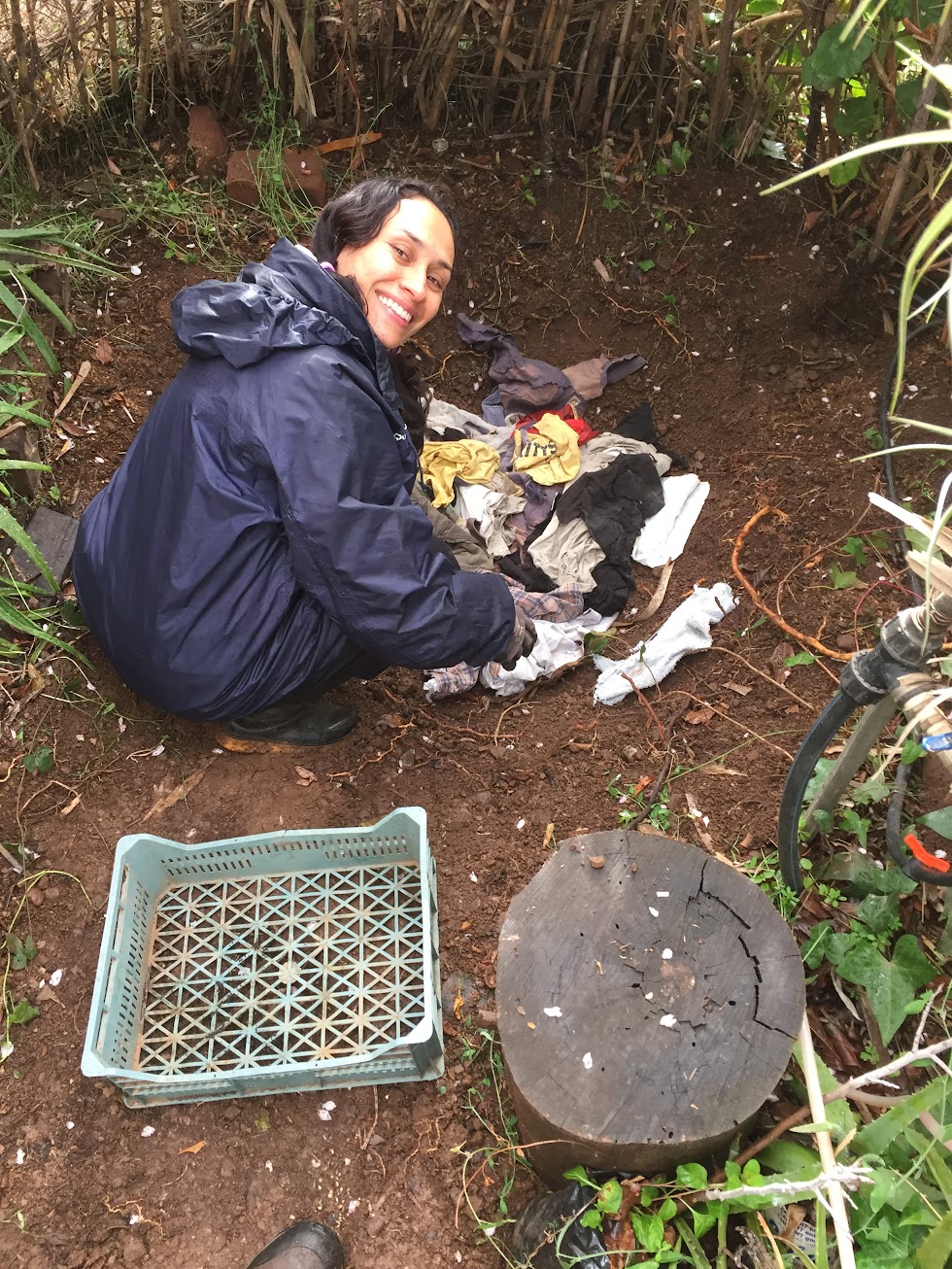 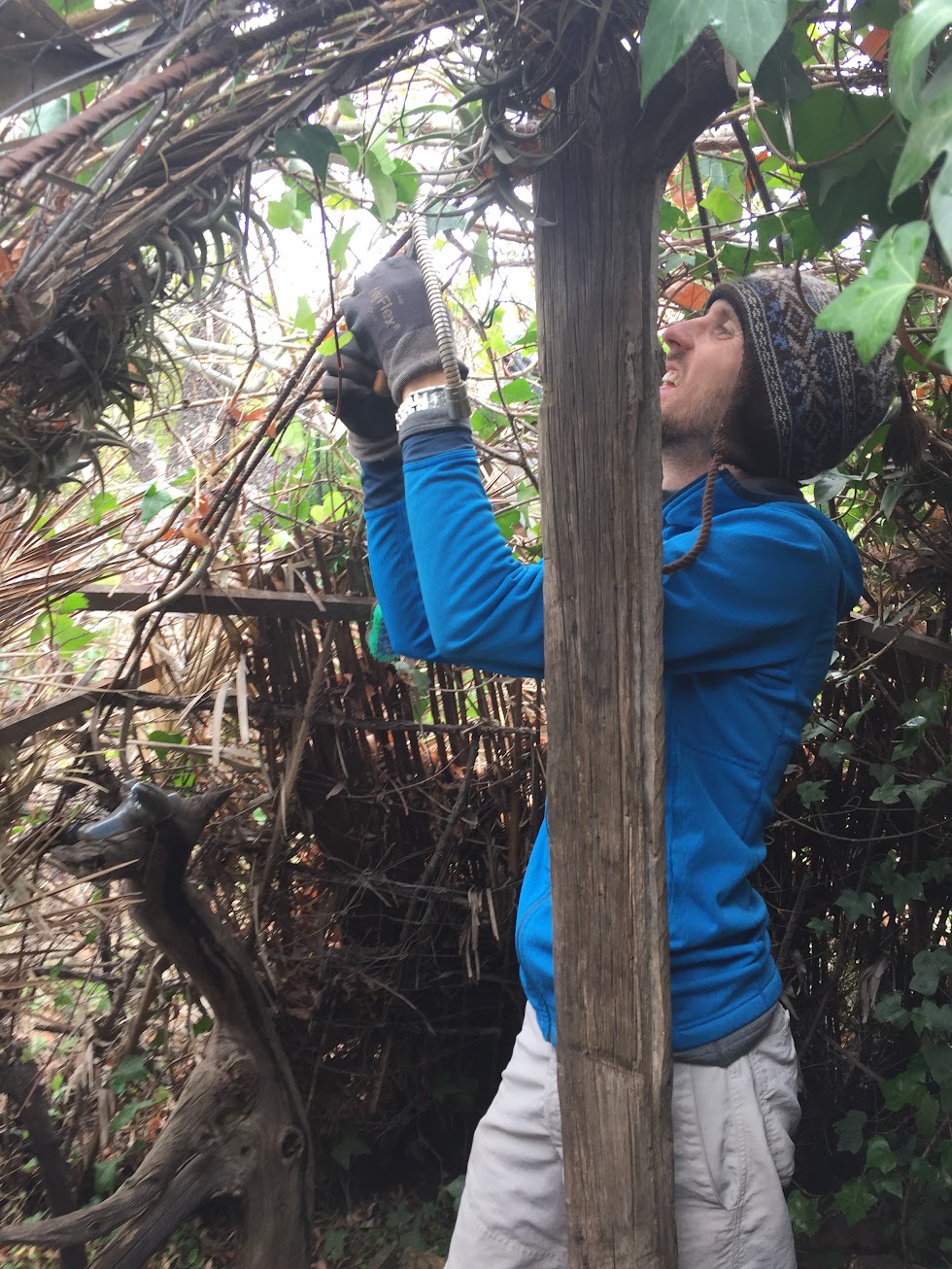 After several days of muddy digging, the new shower was up and running!
Then it was just a matter of waiting for the sun… 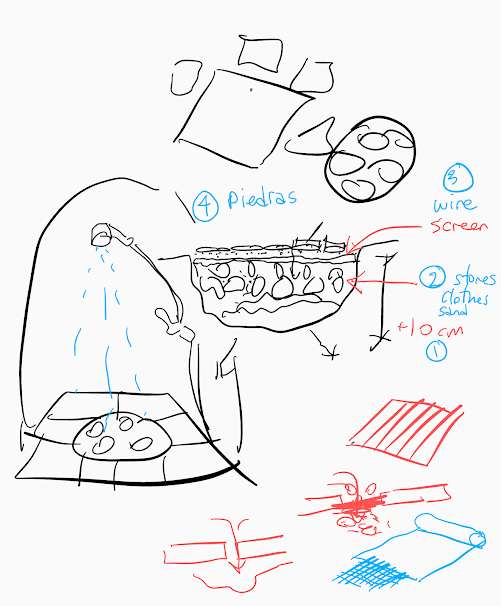 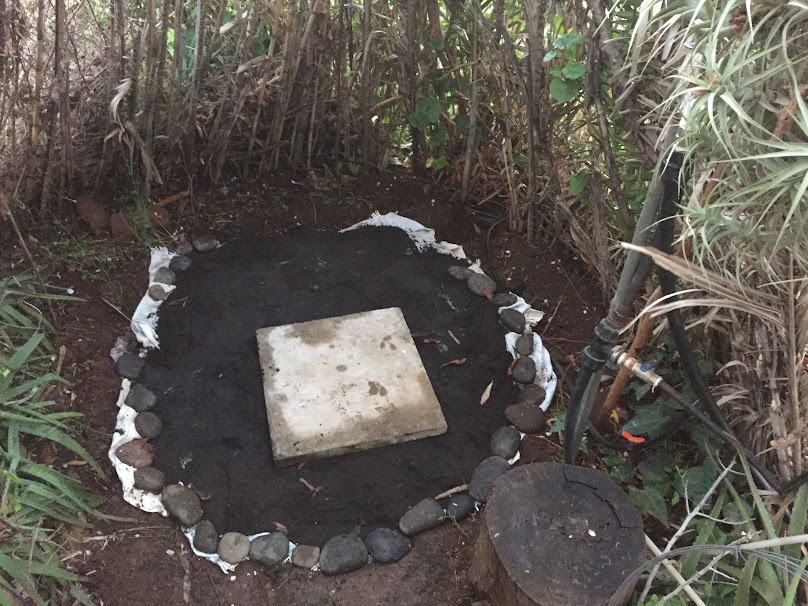 Jeff’s sketch of the solar shower components and the final floor of the shower
Jeff and Sandra decided to help out on each other’s projects and take turns communicating in English and Spanish to improve each other’s language skills. 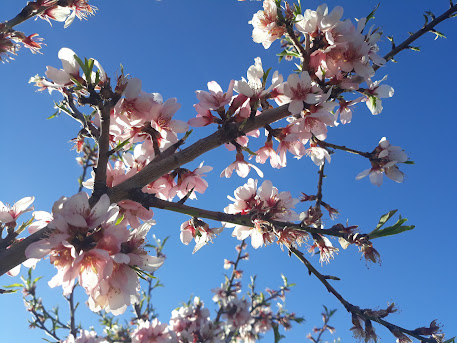 Early February was peak almond in flower season, with the landscape awash in beautiful pink 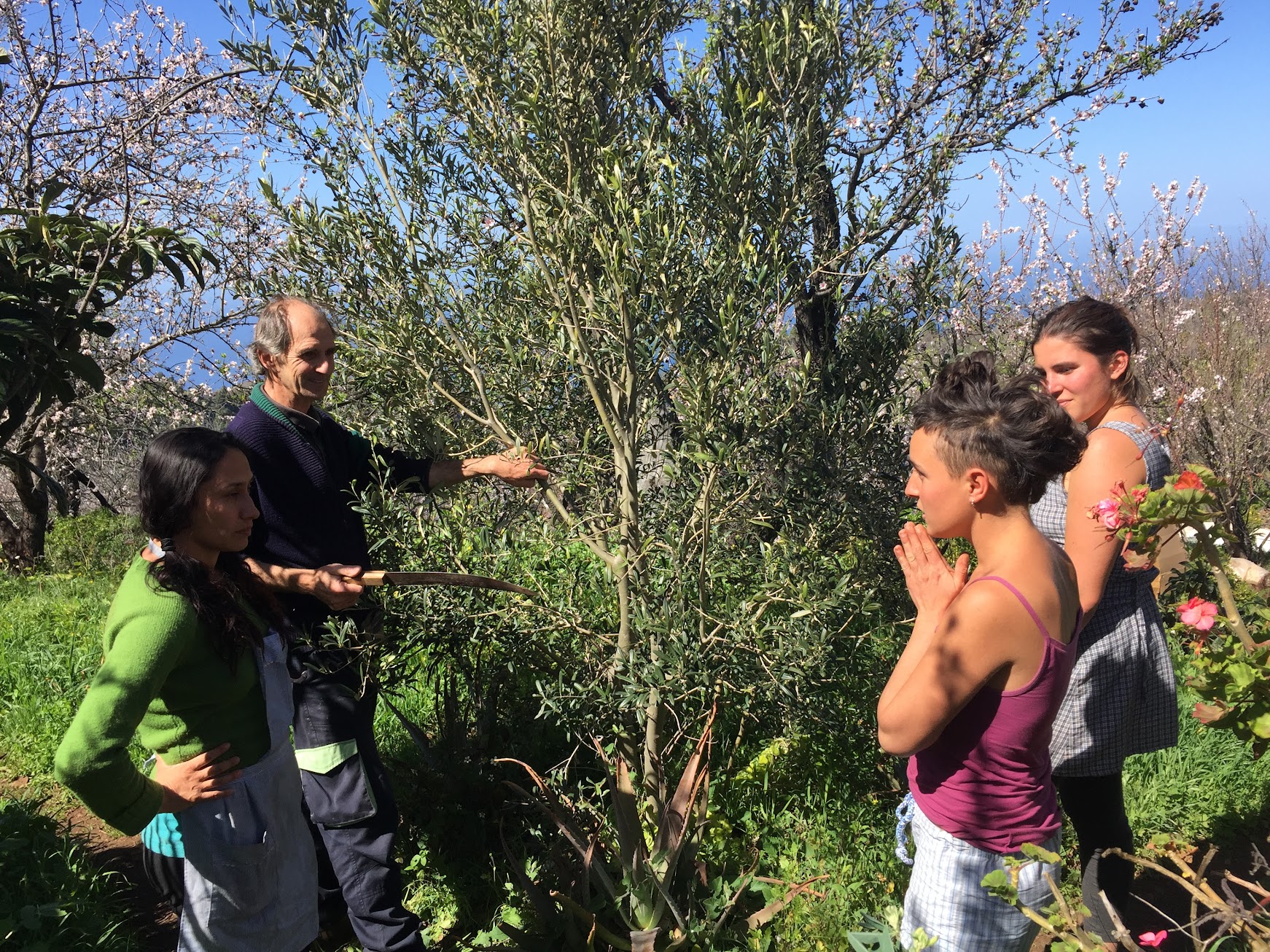 The nearby town of Puntagorda was busy preparing for the annual almond festival, which Fran, Sandra, Karla and Jeff attended.

There was music and dancing late into the night, with some particularly animated Cuban performers.

Back at the finca, everyone was busy collecting ripe almonds that had fallen to the ground. We struggled to keep up with the big harvest! 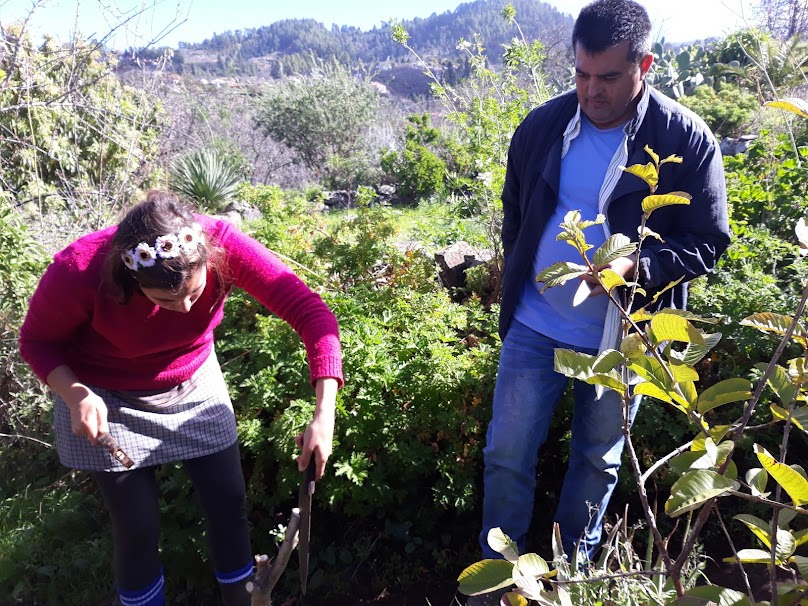 Sandra, Karla & Alex also attended a tree pruning workshop and brought what they learned back to the farm to assist with the vigorous new growth on the olives and tagasastes.
Halel, a volunteer from Israel, put his carpentry skills to work building new doors for the greenhousecomplete with build in latches, which made Stef very pleased to have a warmer environment for her newly planted beetroot, tomato and tagasaste seedlings.
Everyone was busy developing their projects. 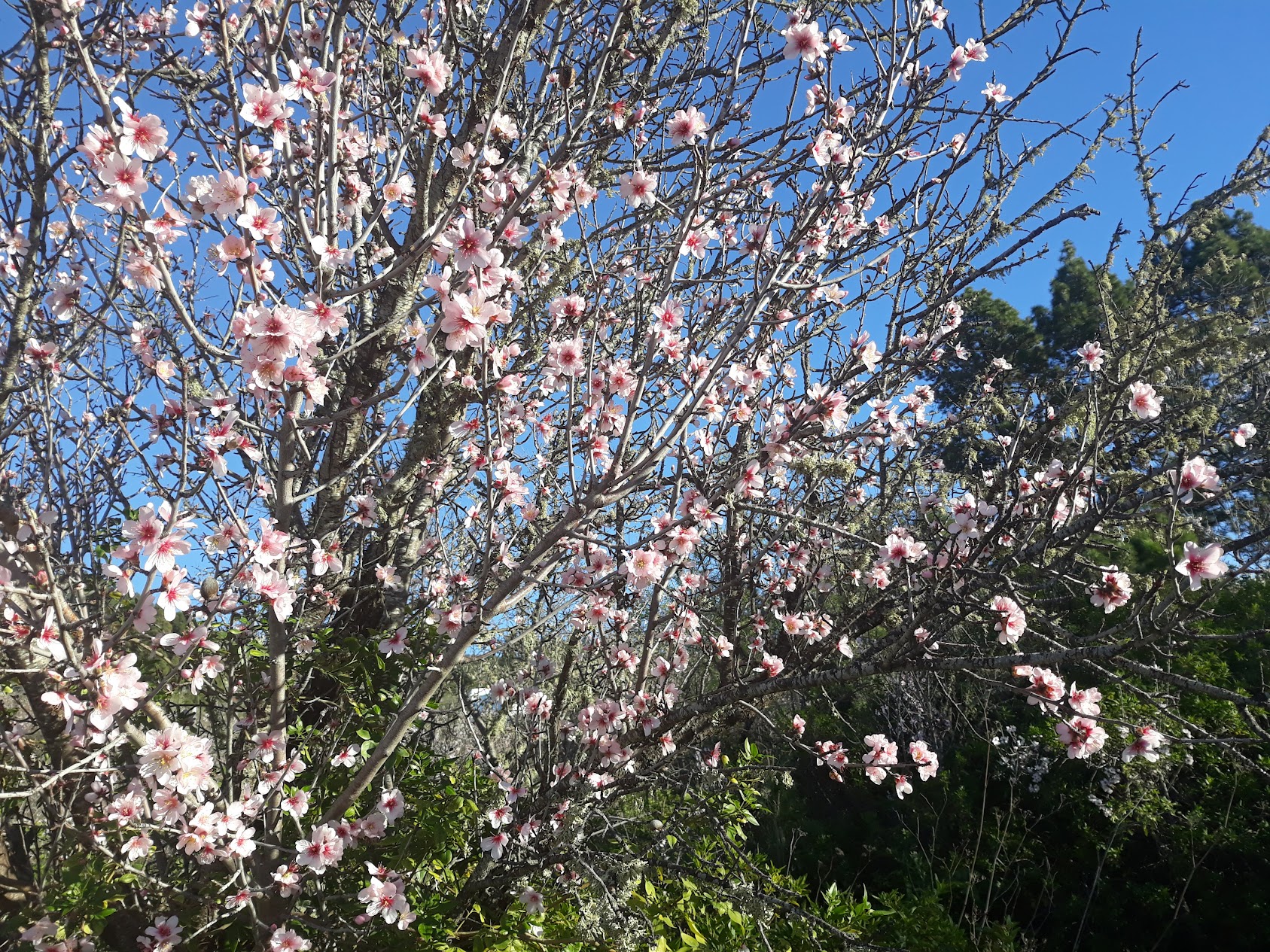 Alex, our volunteer from Catalonia, Spain, cleaned and organized the workshop and worked with Juliette, another volunteer from France, to design and build a new lightweight camping site domo.
We envisage these being the outer shells of guests’ tents or even bigger ‘tents’ in themselves, as they can be covered with climbing plants and better disappear into the landscape. 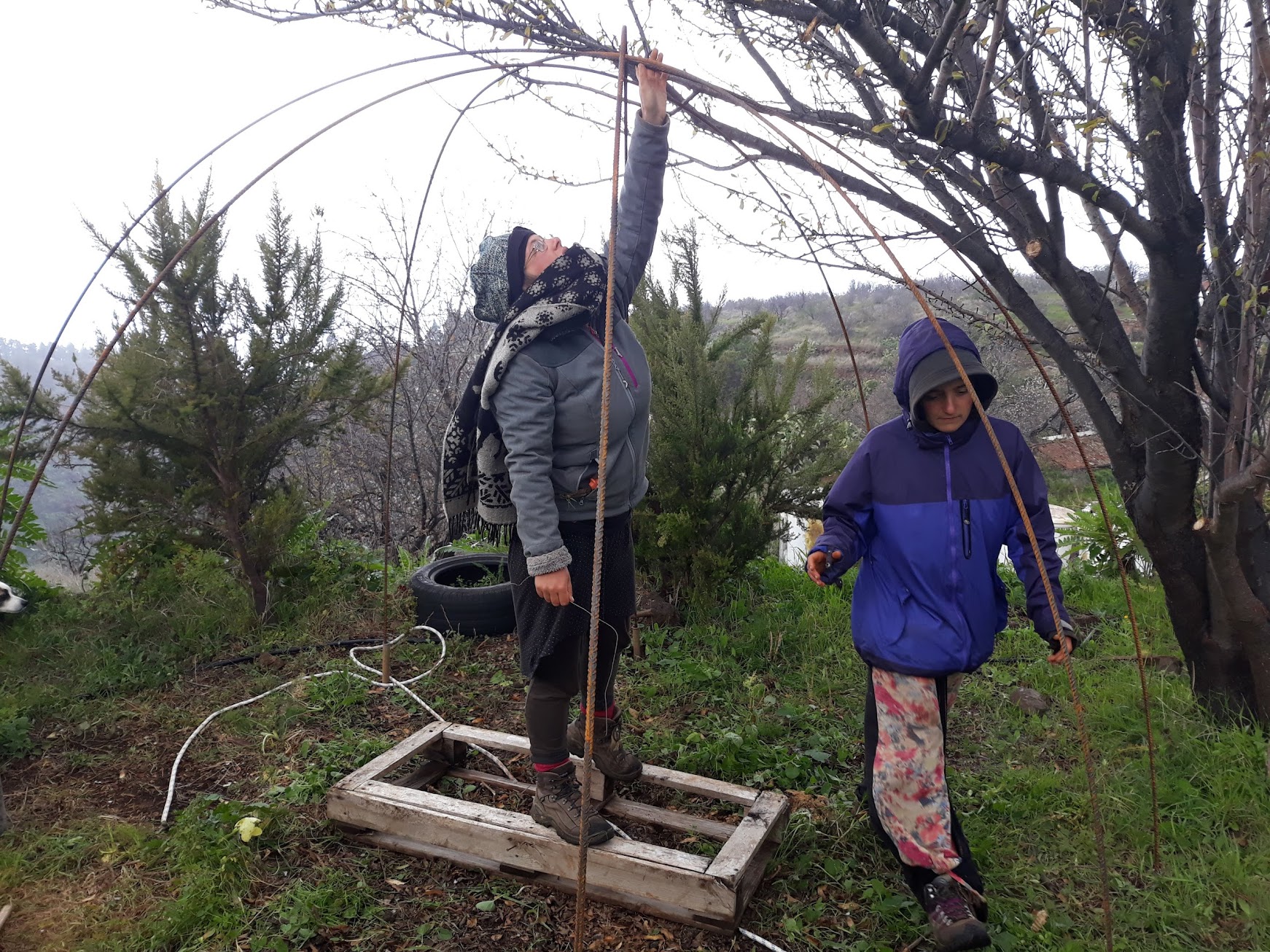 Jeff made a presentation on his research on the rocket bath, picking up where Tanja left off at the end of her stay.   He is an architect & we love his cool sketching and him sharing his professional skills by offering us a sketch-up workshop so that we can do 3D design drawings.  Like this one.  Thankyou! 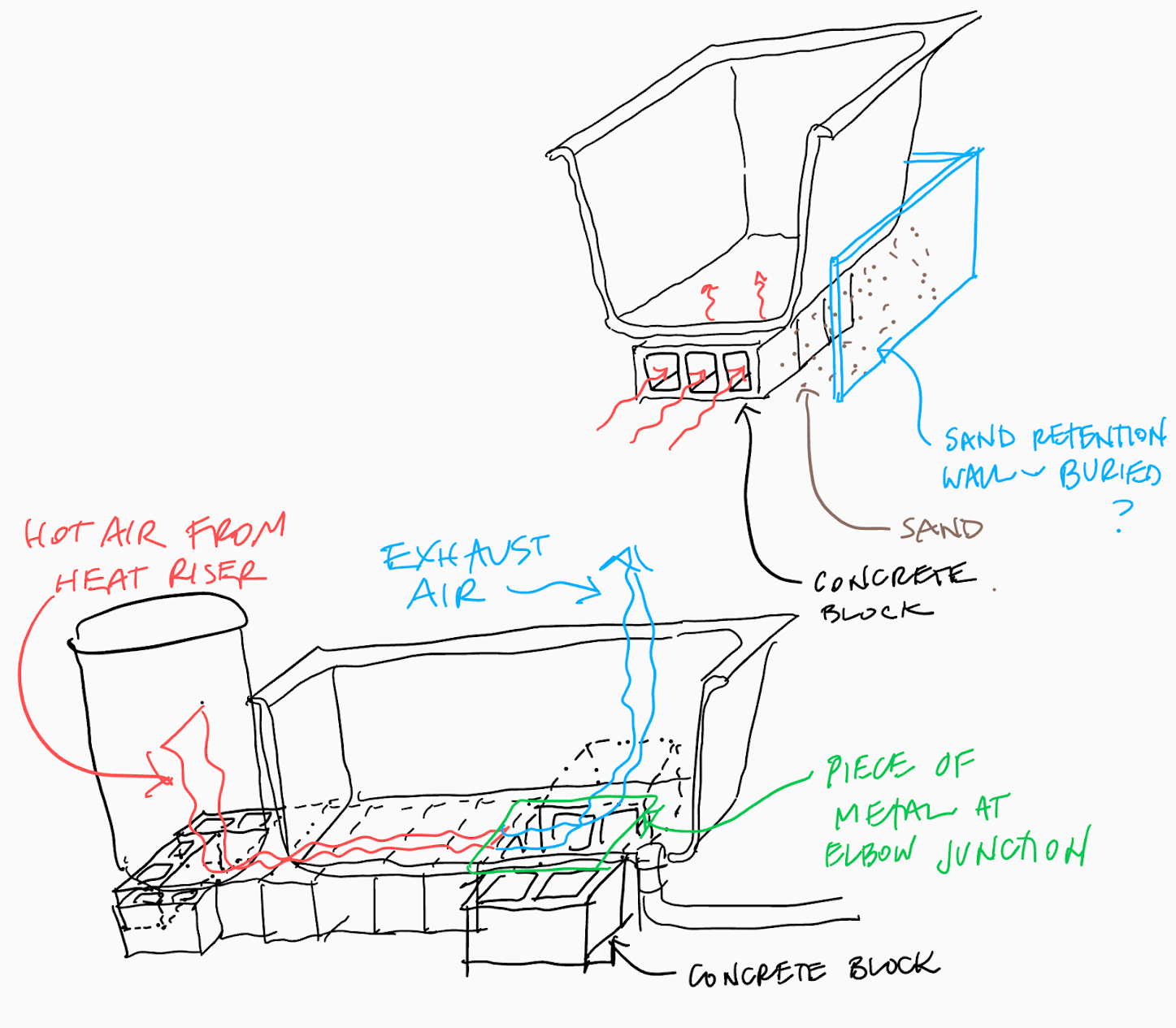 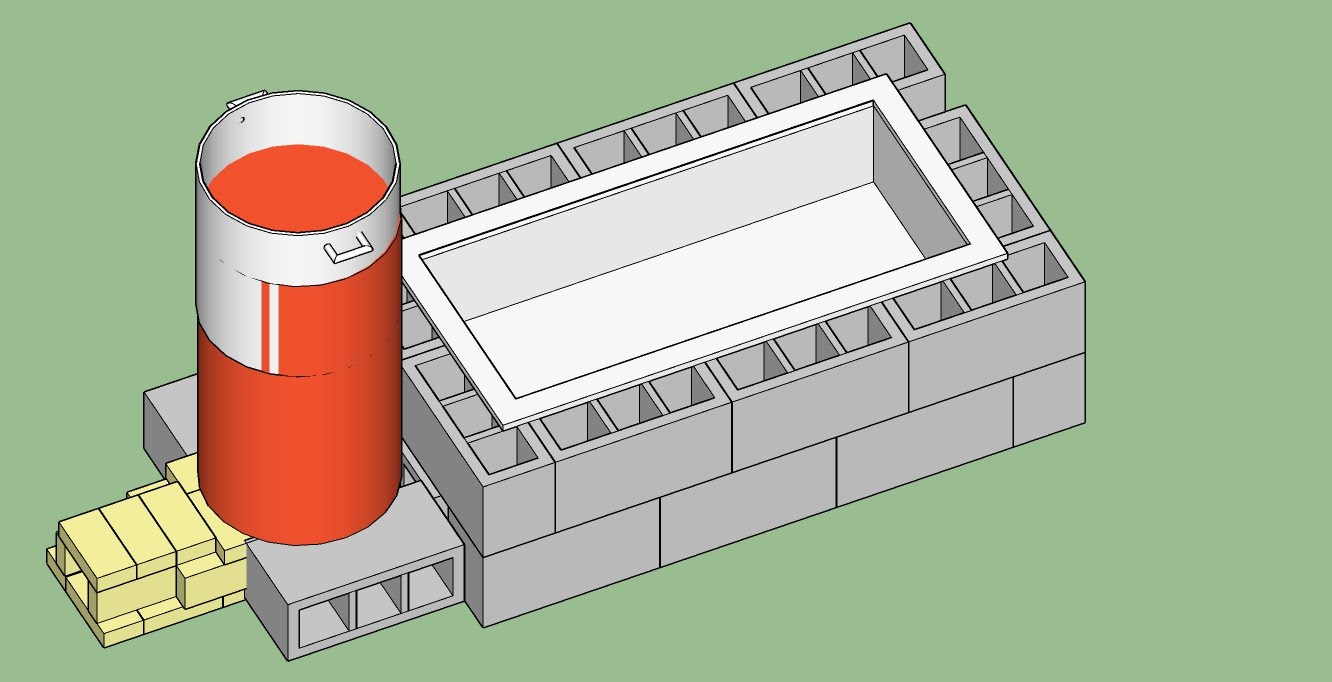 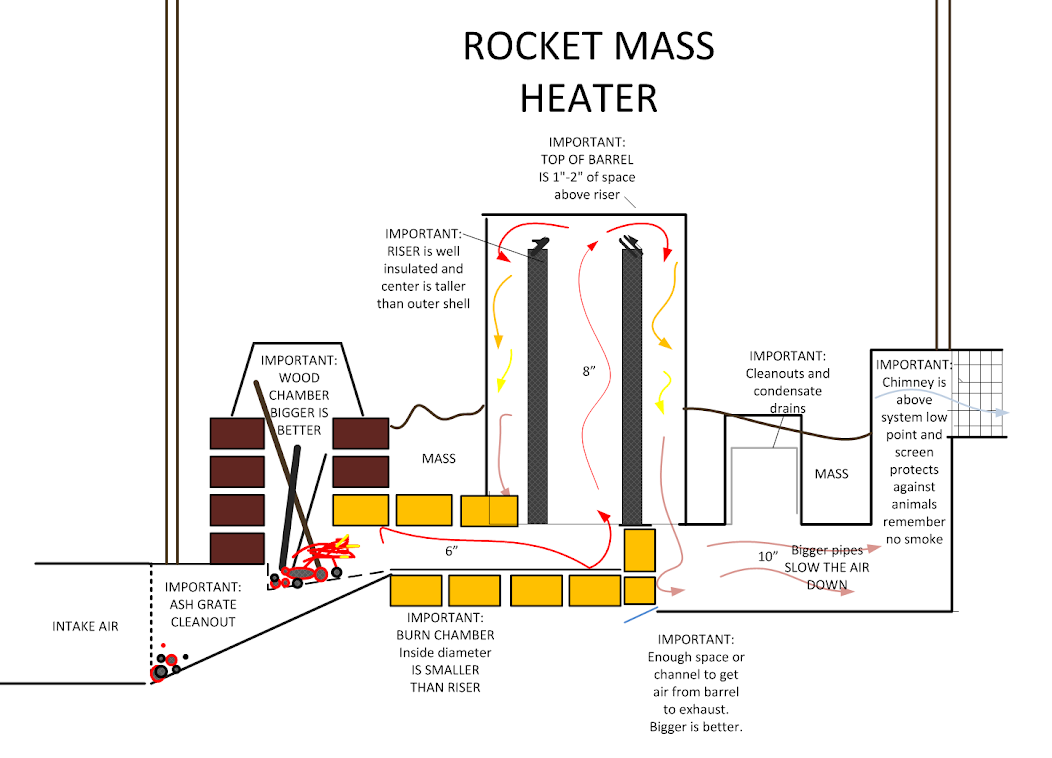 Stef and Maja shared some of their reflections on A Course in Miracles, a spiritual practice they’re both undertaking, which includes a daily practice of reflection around a piece of wisdom.
Stef & Boli enjoyed their 3 daily walks to check the sheep, particularly when they were at the edge of the nearby Barranco where lots of wild bees have their hives, and Maja told us of her transcendent bus ride around La Palma’s Caldera to appreciate all the flowers in bloom and spend some time with God.
Jeff led the group in two ceremonies to thank the spirits of the land, involving fruit offerings, almond milk and heartfelt gratitude. 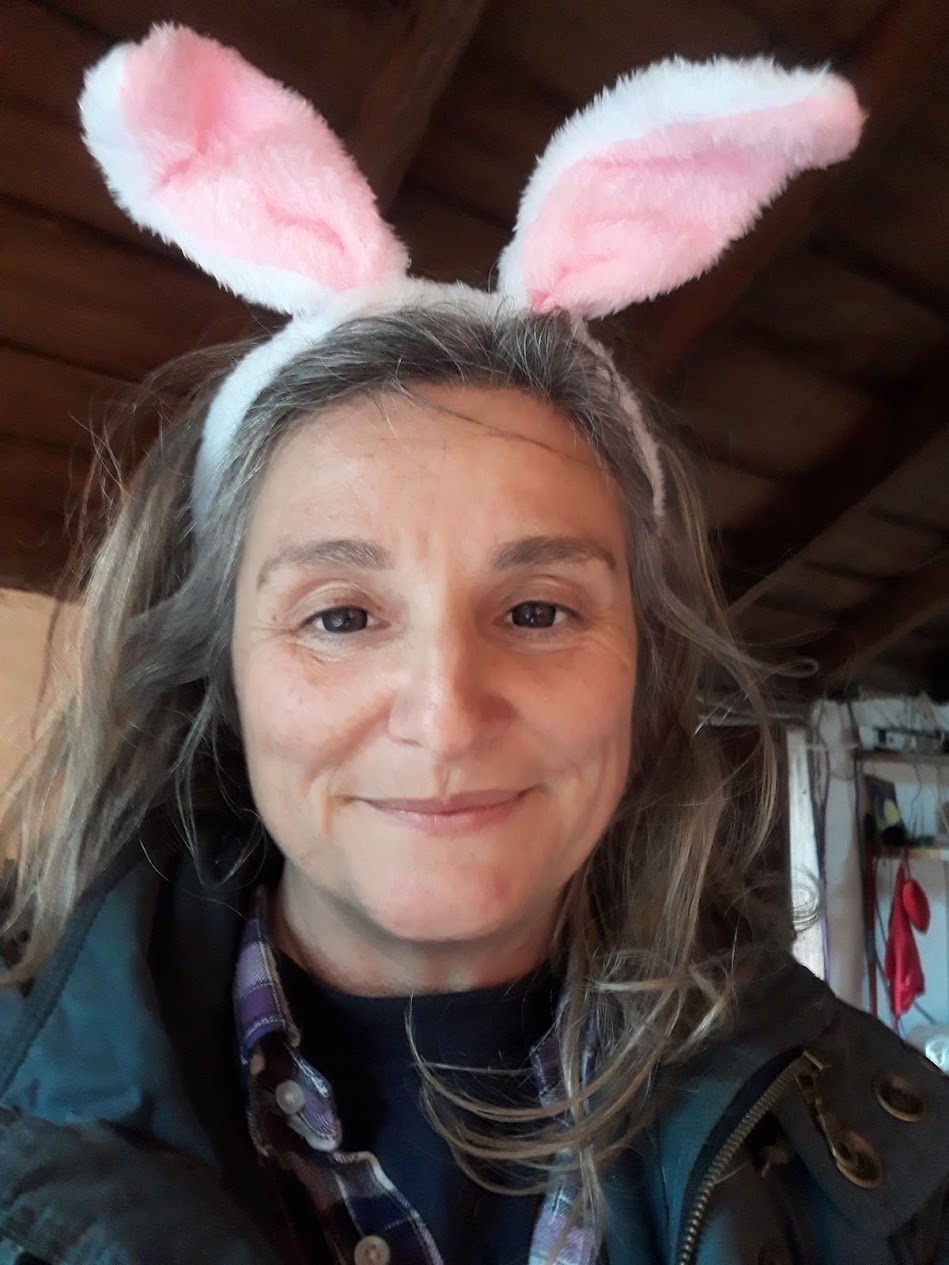 February was also peak season for Carnival in the Canaries, & each town has their own, which go on for days.
Puntagorda (our nearest town) held a grand parade with costumes and floats, wrapping up in a concert on the grounds of the local high school.
Some of us took to wearing silly hats for a while on the finca, and  Sandra, Fran, Jeff and Karla also attended the Los Indianos festival in Santa Cruz, a celebration of the island’s heritage of emigration.
During the 17th & 18th centuries many Canarians left the islands for Cuba, Venezuela and other south american countries to seek their fortune, and many later returned home when they had done so, or failed to. 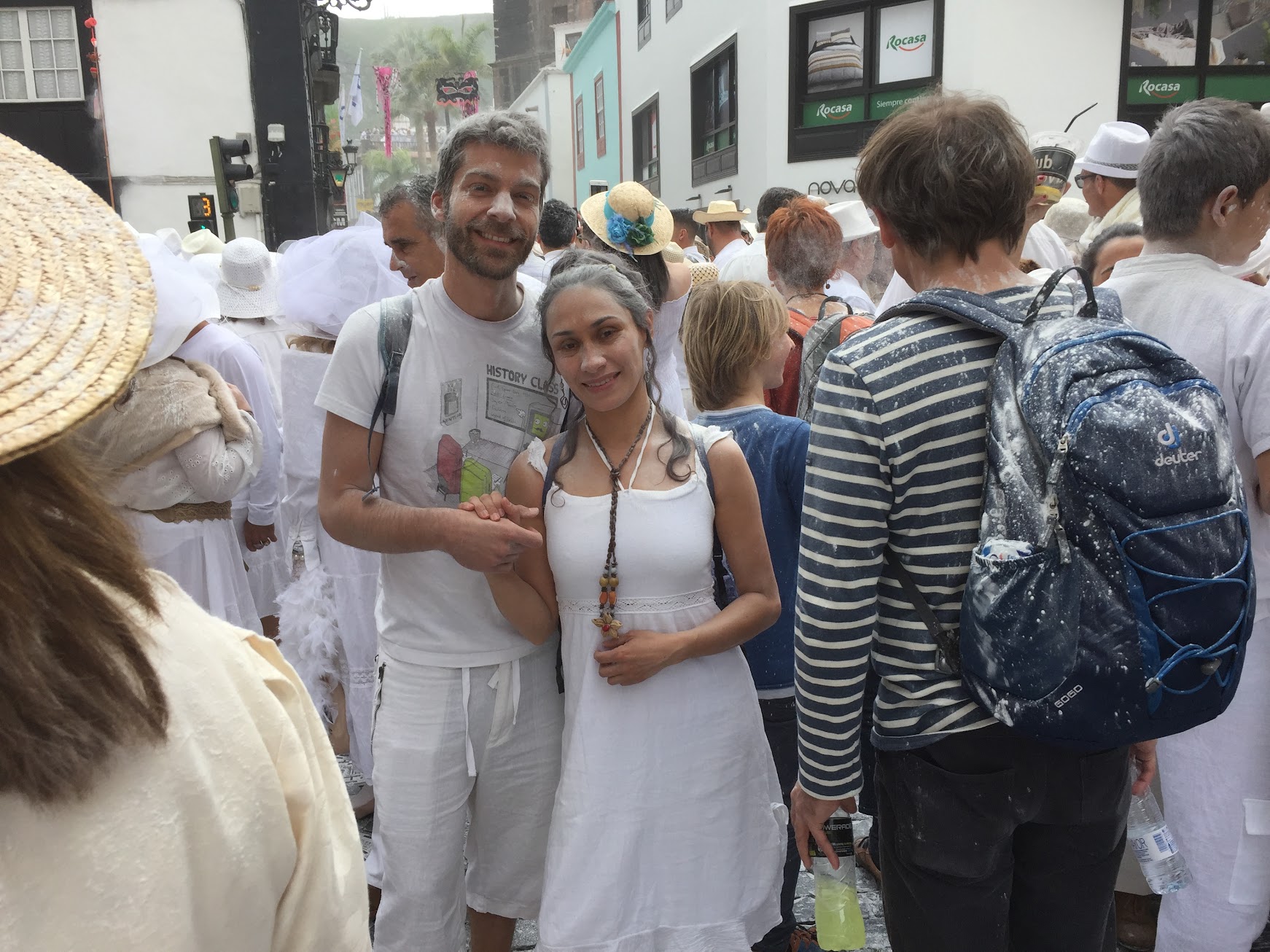 Since the returning immigrants wore colonial whites, and since the festival is a festival of excess leading up to the sacrifices of lent, the local tradition was to cover the town and anyone not clad in white flour, which in modern times has been replaced by talc. 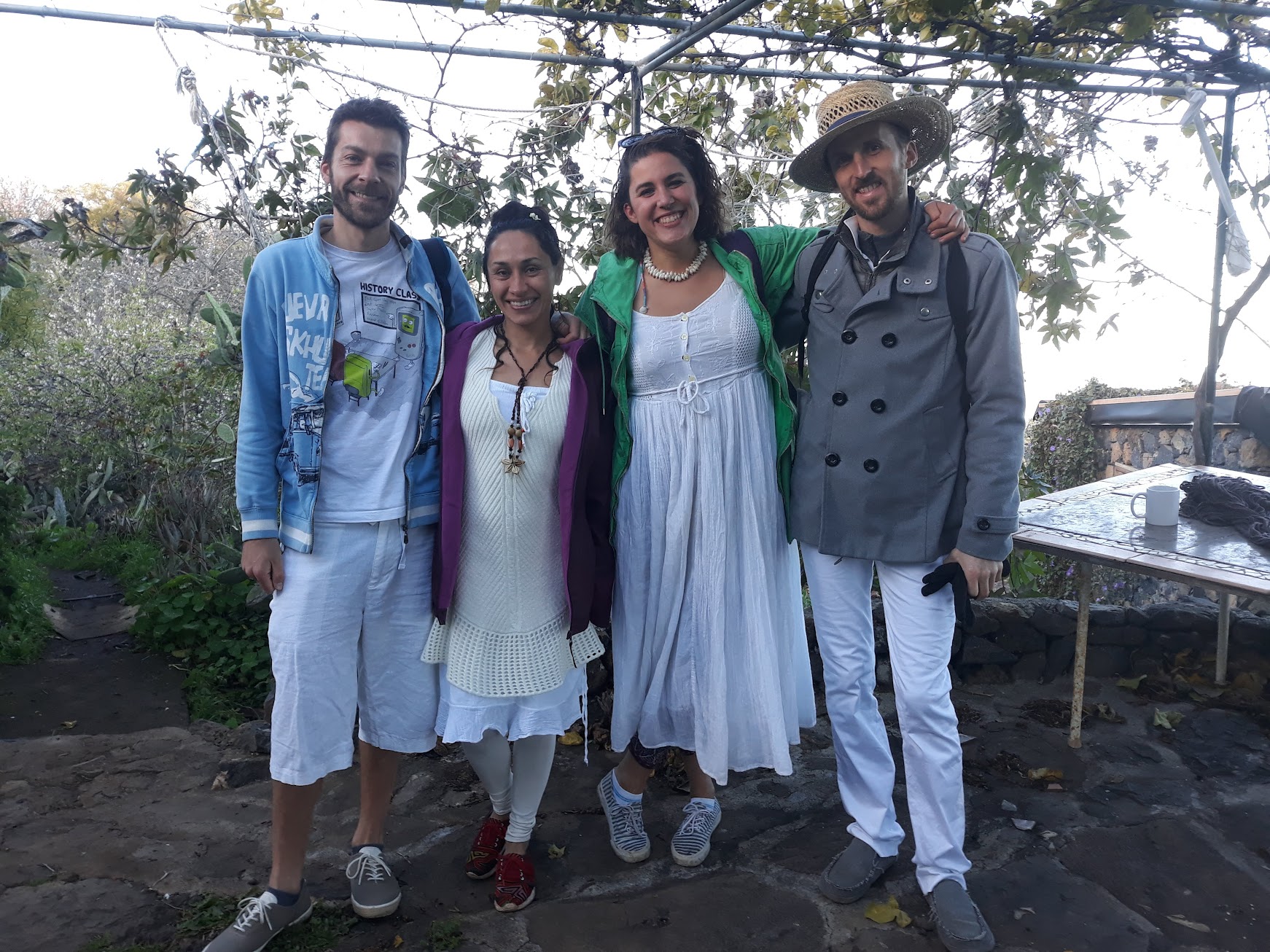 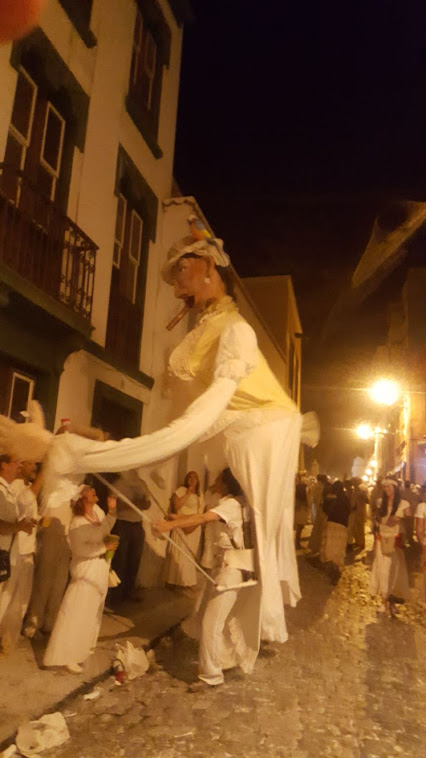 So as well as the people all wearing white, the roads are covered in white powder. What a wonderful mess!
Jeff wrote a blog post reflecting on his experience. 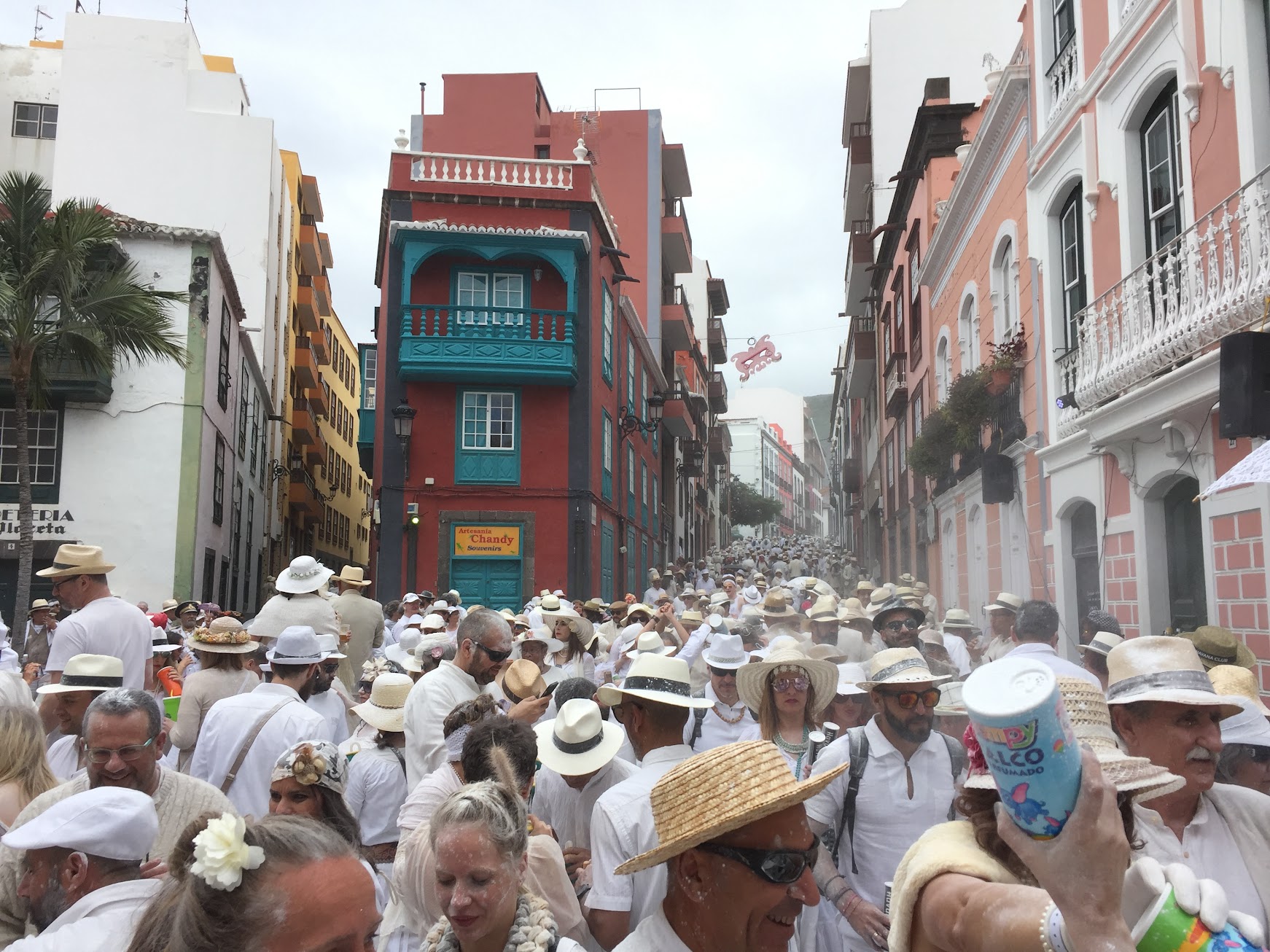 In mid-February we said goodbye to several members of our group,

including Halel,Eduardo, Karla, Alex and Juliette, and welcomed a new guest named Nick from London, as well as a new volunteer from Belgium named Kevin.

Kevin has many wonderful talents, including a working knowledge of home electrics.
He agreed to help renovate the electrics in Hostel Fortuna to bring them up to modern safety standards, including better protection from electrical storms. (We learned the hard way when a lightning strike fried our modems!)
He also loves animals and took right to feeding and caring for the new meat chickensStef brought home as well the petting of the resident farm cats. 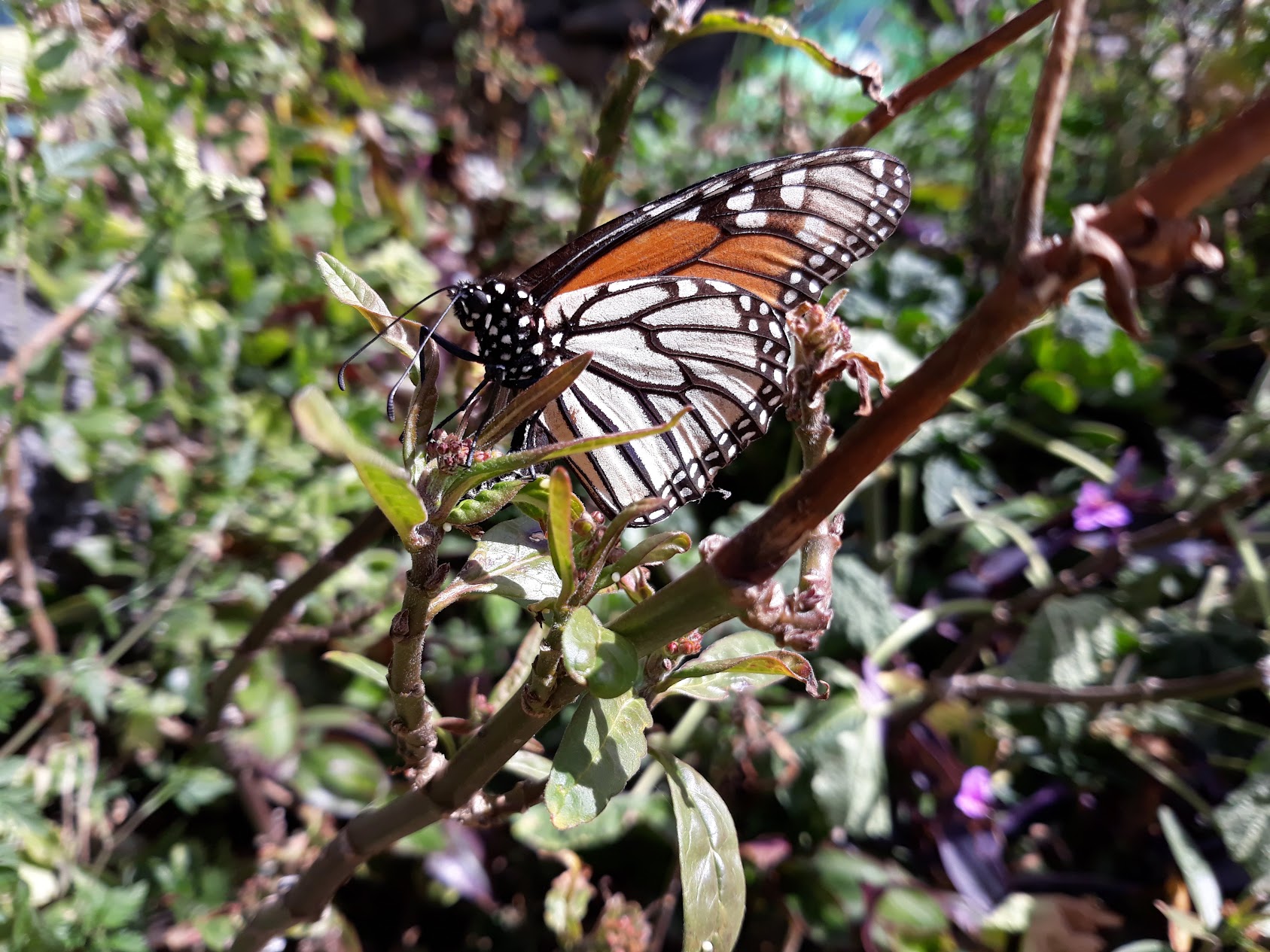 We have the great privilege of seeing Monarch Butterflies breed here, since we have the milkweed plants that is the only food their caterpillars will eat (this above is a mother laying eggs under the leaves of one little bush we have)

February was also a big month for the cats of the Finca.  Rudzielec, Ghost, Tigger and Nala all had appointments at the veterinarian to get spayed in neutered.

We love our kitties but we can only deal with so many desperate pleas when chicken is on the cooktop.
They all came out of the surgeries OK thanks to the tender care of Stef and our new volunteer Kevin, who has already befriended the whole litter. 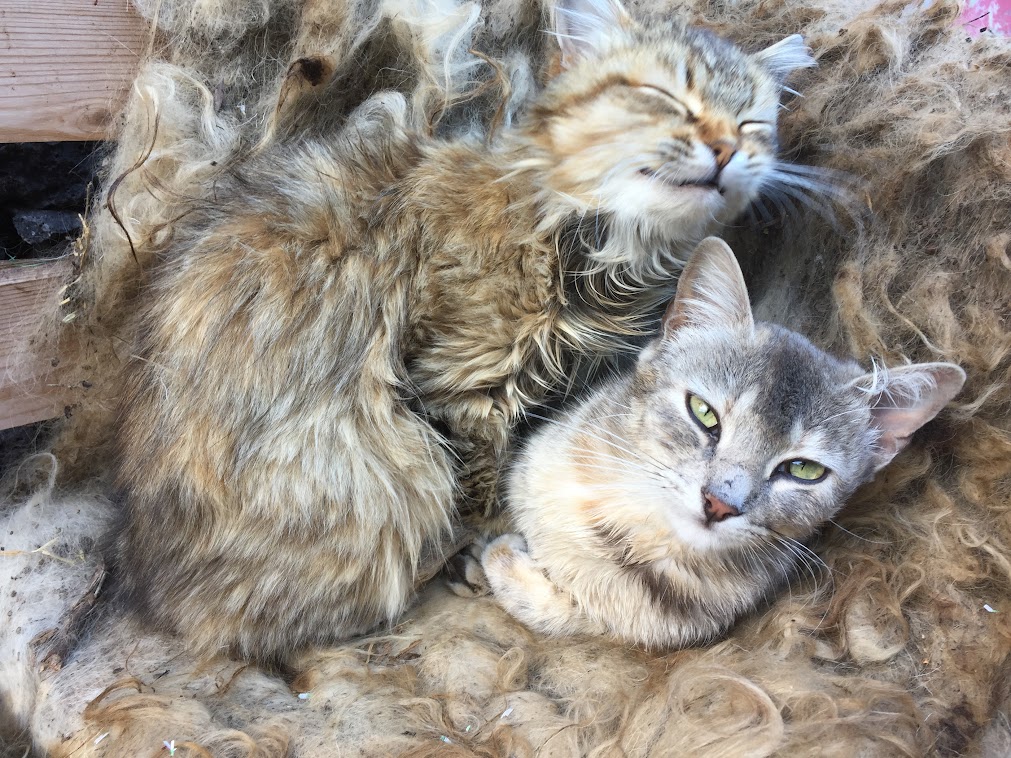 This of course led to many trips back and forth from the vet in Stef’s van, which was also feeling under the weather and spent some time at the mechanic.
Thankfully our lovely neighbor, Henk, offered us the use of his jeep.  While it was very helpful in accomplishing farm chores, we wouldn’t be lying if we said it wasn’t also fun to drive. 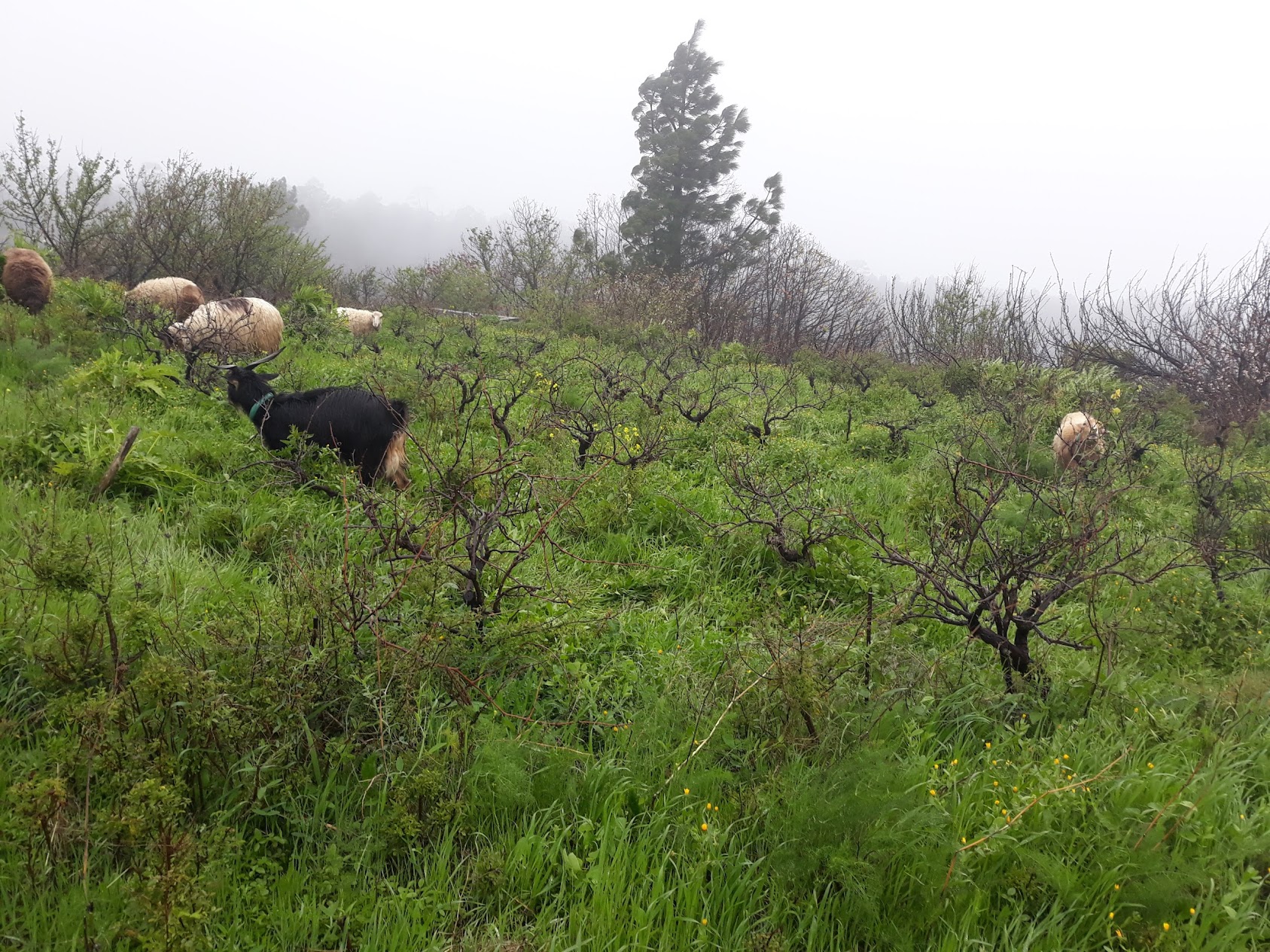 The sheep (+1 goat) had lots of luscious grass to munch on, thanks to the abundant rains we’ve had this month.   We had some wonderful misty days, when we’re enveloped in clouds and can’t see to the next hill. Quite a few cold & rainly days this month did great things for the soil but not so great for some humans .. 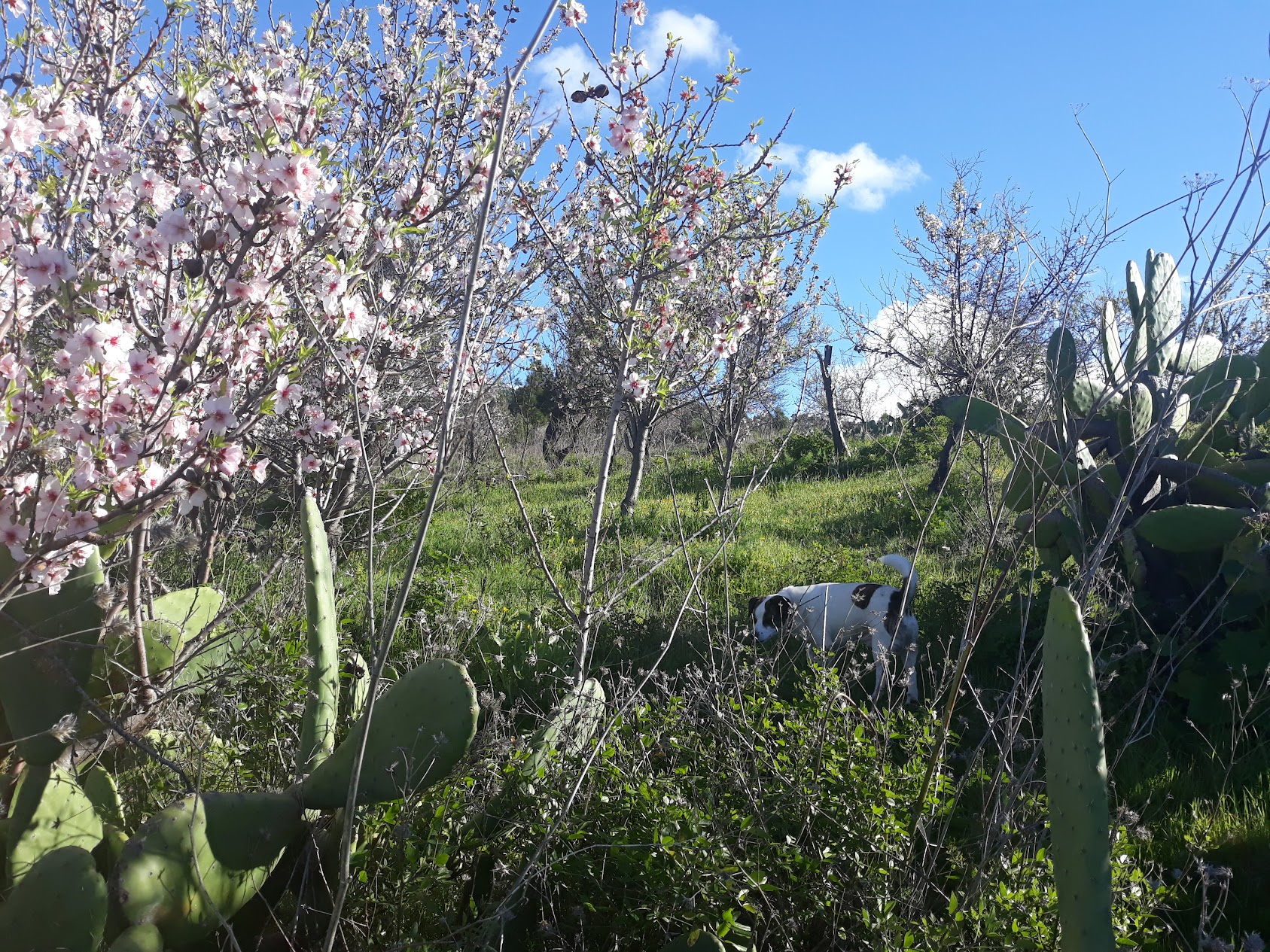 We hope this newsletter finds you well and we wish you all the best with your own integral permaculture journey.

Do post your feedback (comments, questions, etc.) if you have any on this thread in our Facebook group. 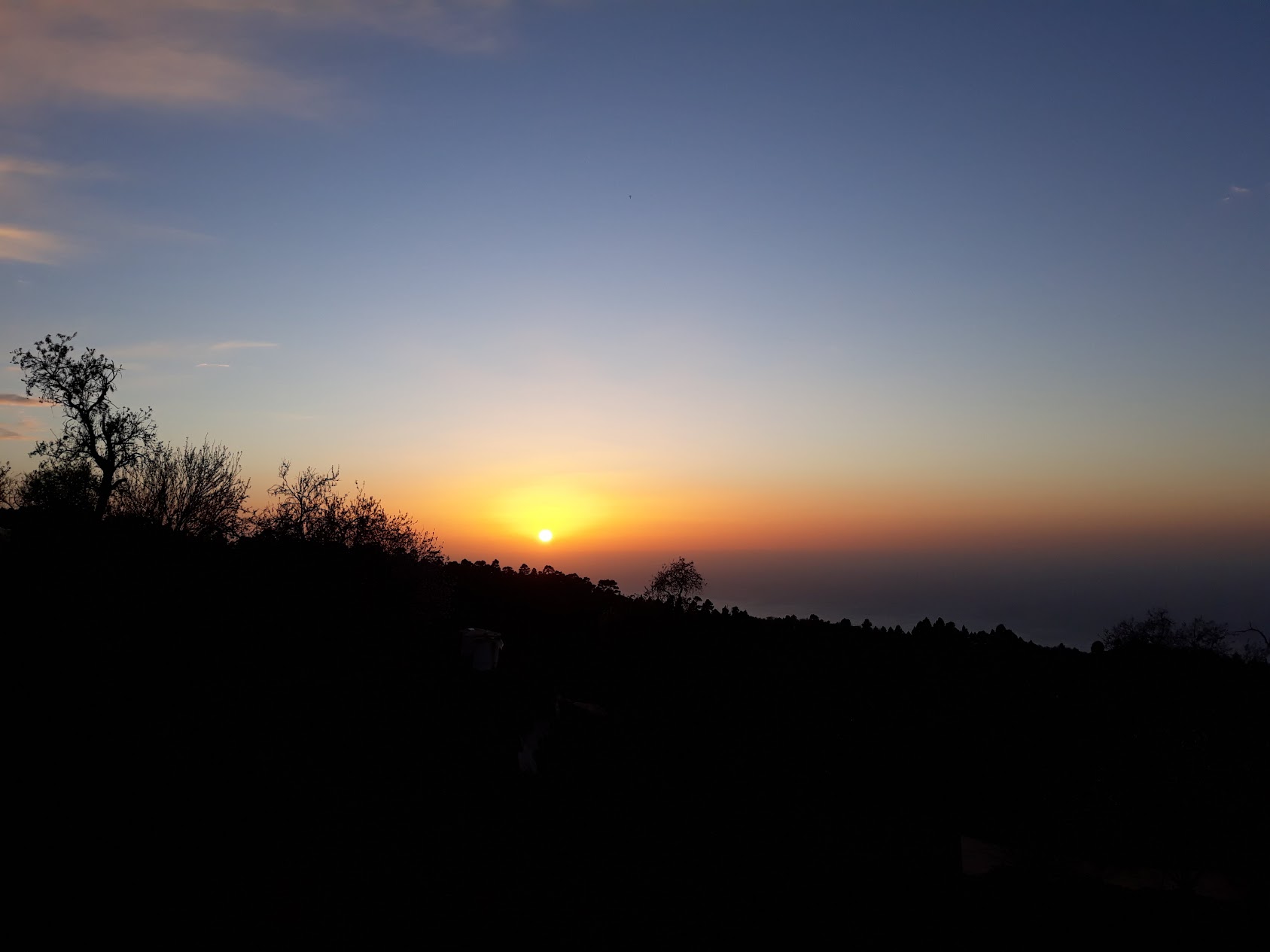